It’s a jungle out there – or at least a crowded urban forest.

Animals, birds, insects and marine life of all kinds share San Francisco with its nearly 900,000 human residents. Sightings abound of coyotes, foxes and deer – even a mountain lion at Glen Canyon Park in 2017, which was relocated to the Santa Cruz Mountains. However, most would-be co-inhabitants are garden variety critters such as raccoons, possums and bees. 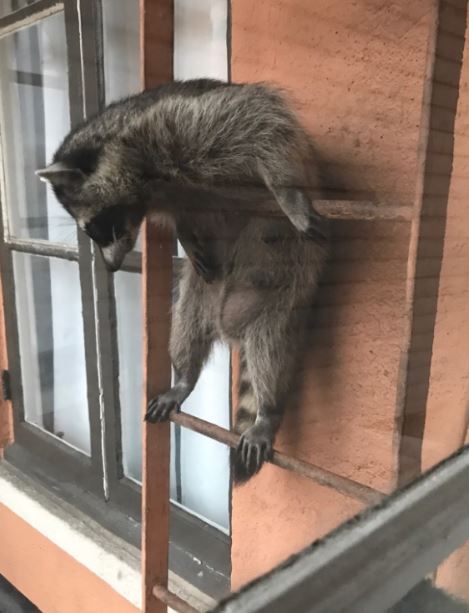 A raccoon hangs out on Taylor Street.

Just like any other property owner, Veritas is by no means immune to these wild housemates, but what stands out is how our team looks for solutions that are humane to wildlife guests while we accommodate our human residents.

“We’re committed to safe and environmentally friendly methods that ensure the safety of both our residents and the creatures,” said Veritas’ Jeff Jerden. “Some people are terrified to see wildlife close to home, but it can be an interesting, exciting diversion from everyday life too.”

In some ways, wildlife relocation is just as complicated as a resident’s apartment move.

Here are two examples of Mother Nature’s friends who needed some helping hands, and the outside experts that are sometimes required.

When a resident of 1340 Taylor Street heard noises behind a wall, he called resident manager Patric Dunbar, who phoned a pest control service, thinking it was a small problem. “Oh, no, you have something big,” the pest control tech told him.

It turns out that a pregnant raccoon had built a nest inside the Nob Hill building’s wall.

Trapping and releasing wildlife that moves into a house or structure is not a good option. For starters, it’s largely against state law and is only utilized in extreme situations such as for the mountain lion in 2017 (which was, thankfully, not at a Veritas building!). By regulation, most animals that are trapped must be either euthanized or released in the immediate vicinity. Plus, written permission is required from anyone living within 150 yards of set traps. There’s another reason: Traps can result in orphaned offspring who have to fend for themselves.

So Dunbar called San Francisco Animal Care and Control, which referred him to Wildlife Detectives, a San Rafael company that has specialized in safely and humanely removing animals for 10 years.

“We’re the Sam Spade for wildlife neighbors,” the company’s Maggio Sergio joked, in referencing the classic SF-based detective series from Dashiel Hammett. “We don’t harm animals – we try to solve the problem for the long term.” The beehive at Scott Street is exposed after the clapboard wall is removed.

That begins with focusing on what the animal wants – food, water and shelter. In the case of 1340 Taylor, the answer was shelter, and the raccoon had used a vent cover to access her newly found nest. The next step, Sergio said, was waiting and watching. As soon as the raccoon kits were old enough to leave the nest, Sergio and her team were ready. They animal-proofed the opening, secured other possible entries and applied a concoction of ammonia and cayenne, a smelly mixture that raccoons and others who walk the Earth find less than appealing.

Maggio assured that the raccoons had plenty of other options in nearby creeks, parks and other native habitat — and no doubt happier by now.

In another example of safe and humane animal relocation, Veritas found thousands of bees who built a hive within a wall shared with dozens of human occupants. Not great room-mates!

Resident Manager Chris Colon heard buzzing and found bees coming in and out of a quarter-sized hole in an exterior wall at 3820 Scott Street. “I spoke to my manager who knew of a local beekeeper in the city,” he said.

A call brought Philip Gerrie of Noe Valley Apiaries to the Marina District building. A veteran beekeeper, Gerrie removed the wall’s clapboard to expose the hive. “Then I remove the combs and place them on trays,” he said. After that, he broke out his ‘Bee Vac’, a device he made 10 years ago. After collecting the bees, he transferred them to a bee box at his property.

“We saved these wonderful honey-producing creatures who are becoming more endangered,” Colon said.